Conveniently situated just south of the intersection of Route 50 and Interstate 79, this residential community covers roughly 5 square miles in the community.

In addition to a rich history, Hickory Heights also offers its residents a tranquil home life that’s not too far away from the hustle and bustle of nearby Pittsburgh.

The Hickory Heights community has a history that dates back to 1770 when General George Washington acquired roughly 2,800 acres of land in Western Pennsylvania.

Between Washington’s death and the 1980s, Hickory Heights was mostly just farm land. But after the development of the Hickory Heights Golf Course, the land was transformed into the popular neighborhood it is today.

Properties located within the South Fayette community of Hickory Heights today boast custom built and designed homes that feature such sought-after amenities as:

Hickory Heights is also quite popular because of the sheer number of recreational amenities it offers to its residents, including:

This community also provides breath-taking views of the surrounding area.

The middle school is well-respected in the community and in 2006, was named a No Child Left Behind Blue Ribbon School by the U.S. Department of Education.

Other accolades that the school has received in recent years include:

In addition, the entire district was named an “Outperformer” in 2007 by Standard & Poor’s for their incredible achievements during the three previous years.

This neighborhood is also served by the Bridgeville post office.

An available Hickory Heights home for sale is a real treasure on the South Fayette real estate market!

To inquire about available listings or learn more about this Pennsylvania residential community, please contact me, Jim Dolanch, today!

While you’re at it, make sure to take a few moments to check out these helpful online home buying resources:

And if you’re considering listing your Hickory Heights home anytime soon, be sure to contact me as well for a free home evaluation – which will ultimately help determine your list price. 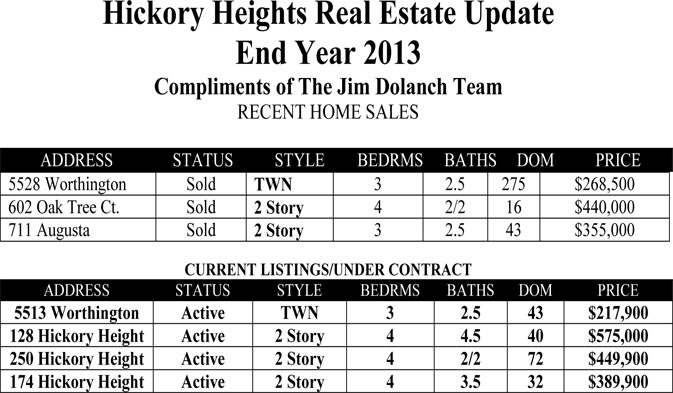 This inviting community of just 14,000 residents is a breath of fresh air on the Pittsburgh area real estate market. Neighbors will know you by name, the school district is actively involved in the growth of each child & there's always something to do.